This is a repost from 8/14/08 in response to comments made by Dan Montana and John Jay regarding the mass killings of Christians in their church in Baghdad on All Saints Day and especially the murder of the heroic little boy, Adam, who followed the murderous sons of  Allah as they slaughtered his friends and his family, pleading all the while, "Enough!"

John suggested canonizing Adam by the Catholic church, and my response is that he is already a saint. The church can no more make him a saint than they can unmake him a saint. What priests and bishops do in the comfort of palaces has no bearing on his sainthood. Christ made him a saint, and this child's blood is on his murderers hands. Perhaps the only prayer worth praying is that God, in His unfathomable love and  mercy, may  cause their consciences to accuse them night and day, and never give them rest. Adam is at rest, may his killers never find rest or peace until they seek Him.

The music is from Sergei Rachmaninov's Vespers, also known as The All-Night Vigil. It consists of 15 songs sung by an acapella choir begining at sunset on Saturday until sunrise on Easter Sunday morning. Each vesper is a prayer, ackowledging the supremacy of God the Father, and extolling the death and resurrection of His Son, Jesus Christ.

Rachmaninov wrote the Vespers in 1915, opening to critical acclaim during a fundraiser for the Russian Army during WWI. This particular recording of the Vespers is from a 1965 Melodiya album of the Moscow State Choir, directed by Alexander Sveshnikov. It is considered the gold standard for all other recordings of this deeply spiritual and soulful piece of music.

In the 1970s Columbia Records, in a joint production with Melodiya, released the Vespers to American audiences. Although I don't have the liner notes, one of the more interesting events surrounding the original recording was the fact that Communist Party hacks, worried about the overtly religious themes of this piece of music, warned the choir members and Sveshnikov against taking the music or the words too seriously, and that they were being watched. It is under this cloud of spiritual oppression that Sveshnikov produced this highly emotional and beautiful piece of music, never before recorded in what was then the Soviet Union. So much for stern warnings. The fifth vesper is titled Now Lettest Thy Servant Depart. And it is a fitting requiem for "Rania" a young teenaged Saudi girl who converted to Christianity, and was killed by her father, who worked for the Commission on Virtue and the Prevention of Vice.

I am trying to wrap my mind around the girl's hellish last moments on earth. The fact that we in the west even know about this is astounding enough, that the reaction to her violent murder has also been published in the Kingdom of Everlasting Hate is astonishment with compounded interest. Let Islam boast of its gains in the west. Mohammed is fast losing the hearts and minds of his offspring in Dar el Islam.

An appropriate tribute from the commenter, dumbledoresarmy at Jihad Watch:


Since no-one in Saudi Arabia will do this for her; since her murdering father will have shoved her into the ground hugger-mugger; let those of us who are Christian say for her now the prayer of commendation.

"Go forth, O Christian soul, on your journey from this world.
In the name of God the Father, who created you.
In the name of Jesus Christ, who suffered for you.
IN the name of the Holy Spirit, who strengthens you.

In communion with the blessed saints
and aided by angels and archangels and all the heavenly host
May your portion, "Rania", this day be in peace
and your dwelling in the heavenly Jerusalem."

"Receive her, Lord, as a lamb of your own flock
as a child of your own creating
as a soul of your own redeeming;
and grant that whatever sins she may have committed
through the weakness of her earthly nature
may be forgiven
and that she may enjoy forever
the clear shining light of paradise."

The comments at Jihad Watch about this gruesome crime express, of course, outrage and horror, with the usual troll comment thrown in just to make things so much more angering. But what is missing is the silver lining of hope within the tale itself. Again, we know about this in the west, why? Because of the internet. Certainly, the mainstream press will ignore it or whitewash it as they do everything else. No surprise there.

Saudi Arabia bans Bibles, crucifixes, Stars of David...and yet, this girl became a Christian. She even blogged about her faith, and had the courage to confront her father and brothers about it. Again, why? Because a ban is foolish and futile. The truth came in over the transom of the internet. Ban a Bible. Faw! You can download a Bible in nearly every language on the planet as an MP3 file, or a pdf. One single person can put 50 Bibles on 50 discs or on secret little thumb drives. It is completely futile to ban the Bible.

Saudi Arabia deported 15 Christians over the last month or so. (This was written in 2008). Perhaps they were a little too effective in their quiet witness.

Saudi Arabia exports its Wahabbist poison into all the ports in the West. Our craven leaders are too afraid to even name that religion which sponsors terrorism world wide! They scratch their chins in willful ignorance. Yet, from within the Evil Kingdom itself, "Rania" was a brief and brightly shining light in the darkest places of the human heart. As light which travels far and is seen long after it has been extinguished, we get to see for but a moment her ember.

Rest in Peace, sweet Rania. Your work is finished. We must toil in your place.
And your brother, Adam, greet him with a sister's kiss.
Posted by Mother Effingby at 4:22:00 AM

Don't just sit there, say something!

The woman in charge

Mother Effingby
Lancaster, Pennsylvania, United States
Children like me, really, they do. They always do once they stop crying. 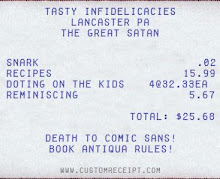